David Bowie is the most exceptional human being to have roamed this earth, an absolute icon – for both his legendary music and his unquestionably insane fashion style. A British singer, songwriter and actor, Bowie’s innovative music granted him the title as one of the world’s best-selling music artists. Known as the ‘star-man’, his glam-rock style along with his many hits, including ’Heroes’, ‘Changes’ and ‘Let’s Dance’, will never cease to invoke absolute wonder and appreciation within all of his fans. Here are some of my favourite looks from Ziggy Stardust: 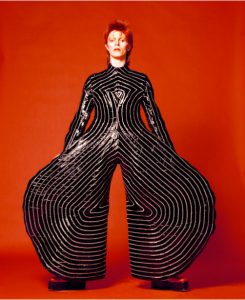 The most phenomenal fashion piece I have ever come across. This UNBELIEVABLE statement one-suit does not compare to any other fashion ensemble in history. The elongated pants are the best feature, enhanced by the illusionistic silver and black striped-pattern. The red platform boots also heighten the impact of this phenomenal extravaganza. 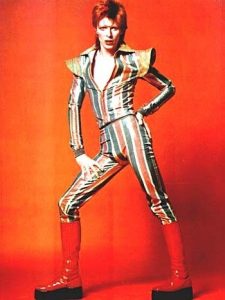 Hitting us again with the red patent platform boots, this one-suit is both playful and circus-like. The hectic, luminous shoulder-pads, along with the sneaky zip-down front, and shiny red and silver stripes, is quintessential of Bowie’s cheeky and charming personality. His sassy hand-on-the-hip pose is wonderful. 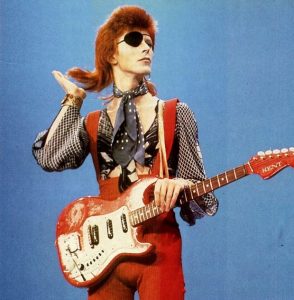 Another one of my favourite outfits. Bowie has a tendency to embody an entirely different character in each of his stage costumes – here, the red mullet hairstyle, black eyepatch, and golden hoop earring, is reminiscent of some hybrid rockstar pirate! There are so many spectacular components  the polkadot cravat, the red overall suspenders, the flow geometric undershirt, all topped off with the flamin’ red electric guitar. 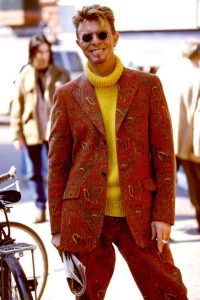 Even during his 50s, he never failed to stun with his effortlessly beautiful outfits. Always bright and never dull, this red paisley suit goes perfectly with the golden yellow turtleneck. The John Lennon glasses are a winner! 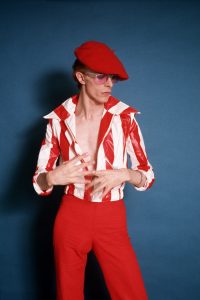 He’s obviously an enthusiastic lover of the colour red… and he makes it work every time!! This synthetic and bold red and white striped, collared shirt, is slimming along with his straight-leg red trousers. The pink-tinted glasses and red beret radiates a classic Parisian street-style fashion. 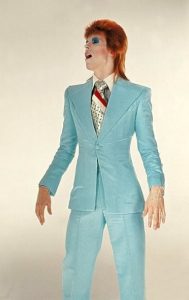 Exhibiting this amazing outfit in his ‘Life on Mars’ video, he has resorted to a pastel palette, with the complementary colour combination of his red locks and his pale blue suit, incredibly satisfying. The poppin’ blue eyeshadow and patterned tie adds to the immeasurable aesthetics. 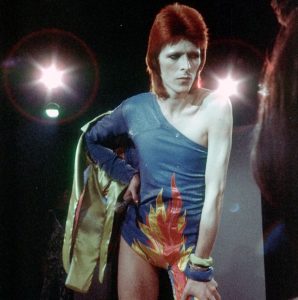 His fashion is often androgynous by nature – here, he wears an asymmetrical, off-the-should blue leotard with a flaming red emblem. The sleeve is flowing with satin gold material – unreal. 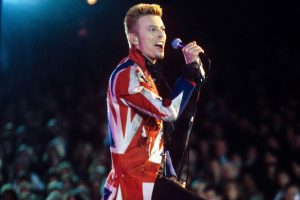 The classic outfit to demonstrate patriotism for his home country, this Union Jack red, blue and white jacket is undoubtedly one of the most memorable costumes he ever wore.

Emitting an effeminate vibe, this outfit dates back to Bowie’s hippy days with his wife Angie. The baggy white shirt and casual work pants, in addition to his long, unattended hair shows a wildness in his fashion style. 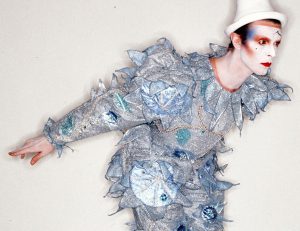 Lastly, this SPECTACULAR costume is of notable mention. Mirroring mimer Marcel Duchamp, Bowie’s freakish white face-paint with the accented red lips and white hat, points to the crazy extension of his stage makeup. The flowery, silver, blue and gold beaded number is absolutely incredible. The shimmery nature of the material that shines in the light, is somewhat similar to Bowie, whose innate talent was and never will be, undermined.

Bowie is my hero – his musical and fashion legacy will continue to influence the extrovert and artistic fashionistas forever!